Hello and welcome to Premier League Player of The Month Predictions for April. It’s been a fun month for a lot of players and a lot of them performed at really good level. Despite ongoing TOTS we should see a very nice and exciting POTM.


So, let’s cover some main aspects of this month. Title in full flow – both City and Liverpool won 4 games and drew 1 (between them), so we should see it go down the wire in May. Race for Top 4 – in Full flow too: Arsenal looking like favorites, Spurs aren’t that far away and then there’s still United (but less likely then others). Relegation race – in full flow. Burnley magically surviving, Leeds not looking good and Everton winning against hard teams and losing vs their direct rivals. This was very exciting month and we’re starting right now. 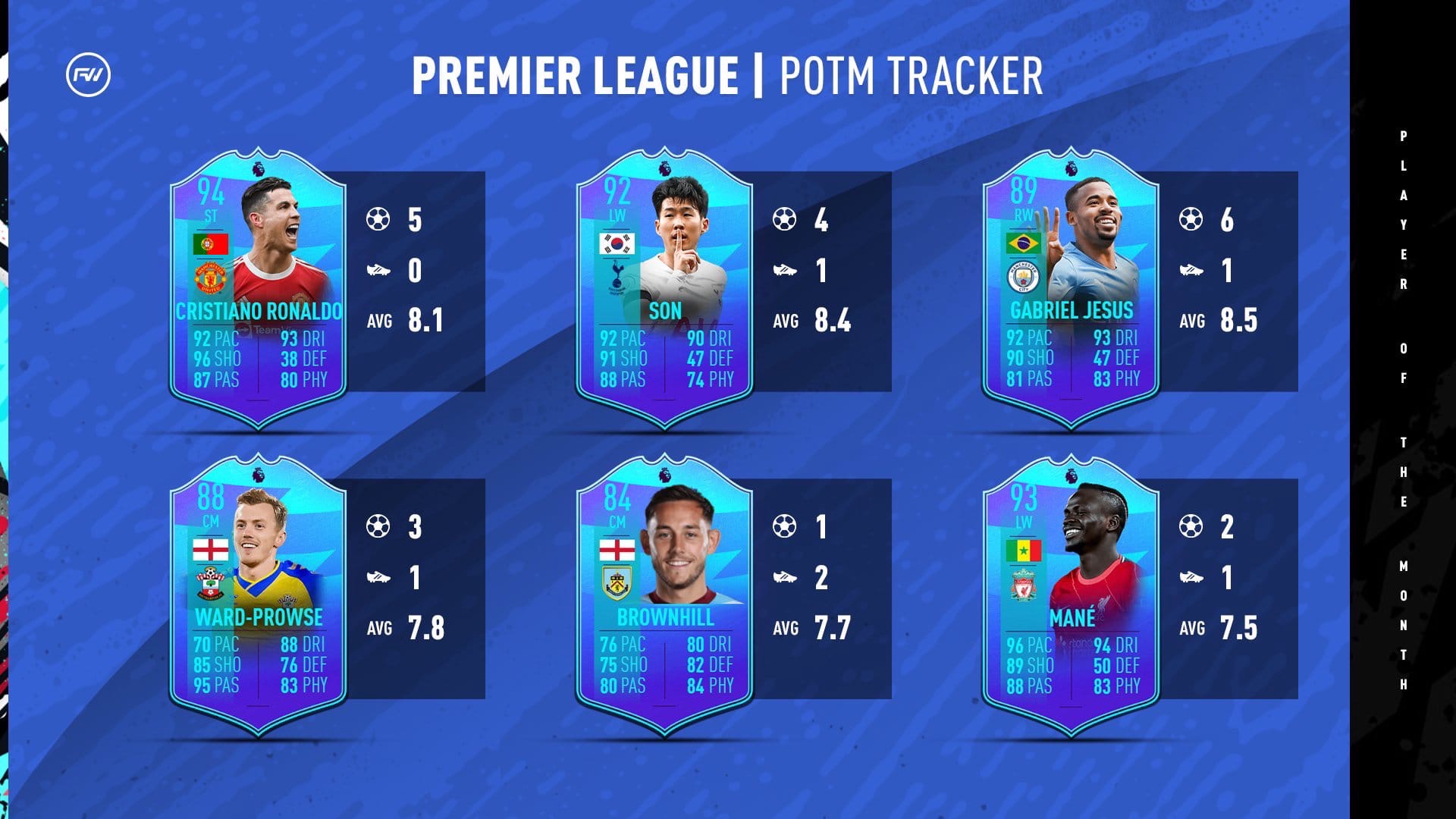 One of the main highlights of this month, as I’ve already mentioned – Burnley going nearly 100% down to magically survive and win a lot of games. There were a lot of players who deserved mention, but I went with Josh Brownhill. Midfielder had a quality month and got 3 crucial contributions. He scored in 2-1 win vs Watford in amazing comeback, he assisted 2 goals vs Southampton and was impressive in other games. Nick Pope would be another good choice (and he’d be better POTM), but he wasn’t that impressive, as Brownhill imo. If Pope wins – he’ll be 87 rated card, if Brownhill – he’d be 84 rated card with some average stats. Both would be fodder cards.


Then I have Sadio Mane from Liverpool. It was hard to find single good performer in Liverpool squad, feels like everyone played amazingly. VVD, Salah, Jota, Diaz, Mane, Robertson, TAA – all played well. I went with Mane, as I felt that he was crucial in some games and got needed contributions to help Liverpool and win some games. He scored vs Manchester United and got an assist in that game and also scored in a game vs Man City, which ended as a draw. It may not be enough for his POTM, but felt like he needed a mention. He plays in new role and he plays well. If he wins – he’ll be 93 rated card with some sick stats and most likely would cost around 300k or a bit more. Depends a lot on his position. If he’s Central – he might be a bit more.


Then I can not mention James Ward Prowse. Another great month for Southampton Captain. 3 goals and 1 assist this month. Southampton had their ups and downs this month, probably the highest point was a win over Arsenal and lowest – 6-0 loss to Chelsea. JWP scored a goal vs Leeds, scored 2 goals vs Brighton and got an assist vs Crystal Palace in 2-1 loss. Overall not that good month for Soton, but they are safe and we’ll see if JWP moves to other club in the summer, as there’re some ongoing rumors about that. His POTM should be 88 rated with some nice stats (but worse than his Captains card and he might get TOTS too). And will be quite cheap as he’s decent fodder.


Then we’re moving to big 3 candidates, who in my opinion have an equal shot at POTM award. Son, Gabriel Jesus and Cristiano Ronaldo.


We’ll start with Jesus, as he’s least desired card in my eyes. He scored 6 goals and got 1 assist. Funny how he started performing, after there were some rumors about his transfer to Arsenal. He scored 4 goals and got 1 assist vs Watford, scored vs Liverpool and scored vs Leeds. Good month for Gabby, who should get a good 89 rated POTM at RW and would be quite well priced around 100-120k, as his previous card worth only 27k. Maybe a bit more, if some stats are good, but I doubt that.


Other 2 candidates will get TOTS and I don’t know if their POTMs will be as desired, as they could be. But still – we should mention both players and recognize their good month.


Heung-Min Son scored 4 goals and got 1 assist (would be 6 goals and 2 assists, if game on 1st of May would count towards POTM). He scored 1 goal and got 1 assist vs Newcastle in 5-1 win, got 3 goals in a game vs Aston Villa in 4-0 win. Sadly he was quiet in games vs Brighton and Brentford, where Spurs dropped points, but overall he was good this month. Sonny in amazing form this season and only 3 goals behind Salah in race for Golden Boot. Sonny will get a very good TOTS and a lot of people would want it, but this POTM would be cheaper option for those who can’t afford his TOTS. 92 rating and around 200k-250k for his POTM would be quite fair value, as his latest POTM Is 100k.


And last, but not least, the man, the myth, the legend. Cristiano Ronaldo had an epic month for Manchester United, despite their awful results. 5 goals in 4 games. 3 goals vs Norwich in 3-2 win, 1 goal vs Arsenal in 3-1 loss, 1 goal in 1-1 draw against Chelsea. Despite bad results – felt like CR7 played as best as he could and scored as many chances as he could. Another POTM award would be a prize for a decent season in mediocre team. He would be 94 rated card and would worth… 800k? Or around that? His 93 rated card in 600-700k depends on a console, so I think that price would be fair for him. Some say that he’s not worth it this year, some enjoy him a lot. Depends on your playstyle.


So yeah, that’s a wrap for this month POTM. We should get some fun card. Maybe we’ll see Jesus – as other 2 main candidates will get TOTS and wouldn’t be as desirable, so Jesus would be the best of the bunch. But I’d be alright with both CR7 or Sonny POTMs, all players deserve it and there’s no clear winner IMO.