Last week I got 4\4 and I was really happy with that result. Predicting relegation games was kinda easy and obvious, but 100% hit with MLS game made me really happy, because there were a lot to choose from.

This week it’s going to be hard. Not just because there’s not much to choose from, but also because I had to mix friendlies, qualification games, games in leagues, and some promotion games. It’s going to be a wild ride, so buckle up. 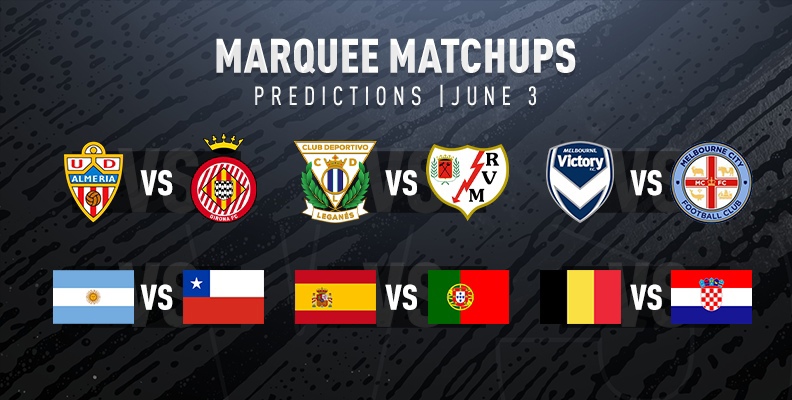 Almeria vs Girona \ Leganes vs Rayo Vallecano
2 games in Segunda for Promotion. It has nearly same system as in Championship and other lower tier leagues, but national championship just ended later, so here we are. I guess main favorites of these fixtures are Almeria and Leganes, as they finished 3rd and 4th with same number of points and more goals scored and less conceded than Girona, but we can never predict those fixtures. I’ll just say that Rayo got into playoffs in the last minute, and they got kinda lucky, but let’s see how it’ll go. I guess nothing more to explain here, as it’s pretty obvious choice for MMs. 1 of those 2 games should be in.

What to invest in: Few Spanish players or few players from La Liga. Those were requirements for Brentford vs Swansea – so it’s possible that they will require something similar

Melbourne Victory vs Melbourne City
Infamous Melbourne derby of A-League. Well, previous fixture for these 2 clubs finished…interestingly. City won 7-0. Yep, 7-0. That game was kinda insane, City smashed them and Victory changed their manager after that. Now, Victory playing somewhat better and lately they won 6-1, so game should be fun and interesting. Melbourne City still sitting at 1st comfortably, but the gap between 1st and 2nd isn’t that big, so I guess this game will be very fun and interesting to watch.
Most likely requirements:

What to invest in:Buy 1-2 players from each team and maybe A-League\Australia in total

Argentina vs Chile \ Any other South America fixture
Qualification for 2022 WC is back in South America and we’re back with Argentina vs Chile, which should be very close and fun game. Let’s remember few previous Copa America, that Chile won vs Argentina. This rivalry is pretty intense and 2 teams are pretty close to each other, even tho Chile’s prime squad is aging a bit and past it’s prime.

Also, apart from this fixture we could get nearly any fixture from Qualifiers, but I’ve chosen game above. Even Paraguay vs Uruguay or Peru vs Colombia sounds decent enough
Most likely requirements:

What to invest in: Few players from those nations, but I doubt that requirements will be rough. 1-2 player from each nation should be enough in my opinion.

Spain vs Portugal \ Belgium vs Croatia

Few friendly fixtures before Euro for some fun. Spain vs Portugal – remake of the best game of WC 2018 (or one of the best). Belgium vs Croatia – 2 very good teams, dark horses of Euro, as per usual. So yeah, there are a lot of friendlies to choose from, but I went with fixtures that are good on paper. I doubt that games will be heated before Euro, as no one want to get injured, but let’s hope for at least decent viewings.

What to invest in: Get yourself 1-2 players from those nations and be safe.


Very hard to predict, as you see – I include a lot of games and of course some of them won’t be included, but still.