We kick off our Team of the Season predictions by taking a look at the Premier League! Who makes the cut?


Bit of a strange year to say the least... Due to the pandemic virus in the world we don’t know when the season will be finish and when we’ll get TOTS, but this is around the time where we start our TOTS predictions and we're still expecting TOTS next month so lets kick off things with the Premier League and see what could be in store for us!

It's been a crazy Premier League season with Liverpool cruising through the league only dropping 5 points, but the rest of the league is really close. City are comfortably sitting 2nd and Leicester are 3rd, the Top 4 is still open and a lot of teams competing for that last Champions League spot. Chelsea this year are playing better than people expected given the massive changes and restrictions they've had to deal with, Manchester United picked up in recent months after signing February's Player of the Month Bruno Fernandes and really started to build up a strong run of form.

Sheffield United have to be up there with one of the main surprises of the season. They are currently sitting 7th and it’s their first year in Premier League for a long time, very impressive by the team coached by Chris Wilder. Wolves are sitting 6th right now and they are having a good year too.

Both North London clubs (Spurs and Arsenal) are struggling quite a lot this year due to different reasons, both changed managers and currently looking like they’ll miss out on UCL football next year.

After that we see what looks like a (mostly) typical Premier League table, the main question in the second half of a table is of course who will occupy those bottom three spots and potentially be relegated depending on how this season is resolved. For now – it looks like 6 teams will challenge for 3 survival spots.

Well, that was a quick rundown on the season so far, so let’s try to predict the Premier League TOTS! 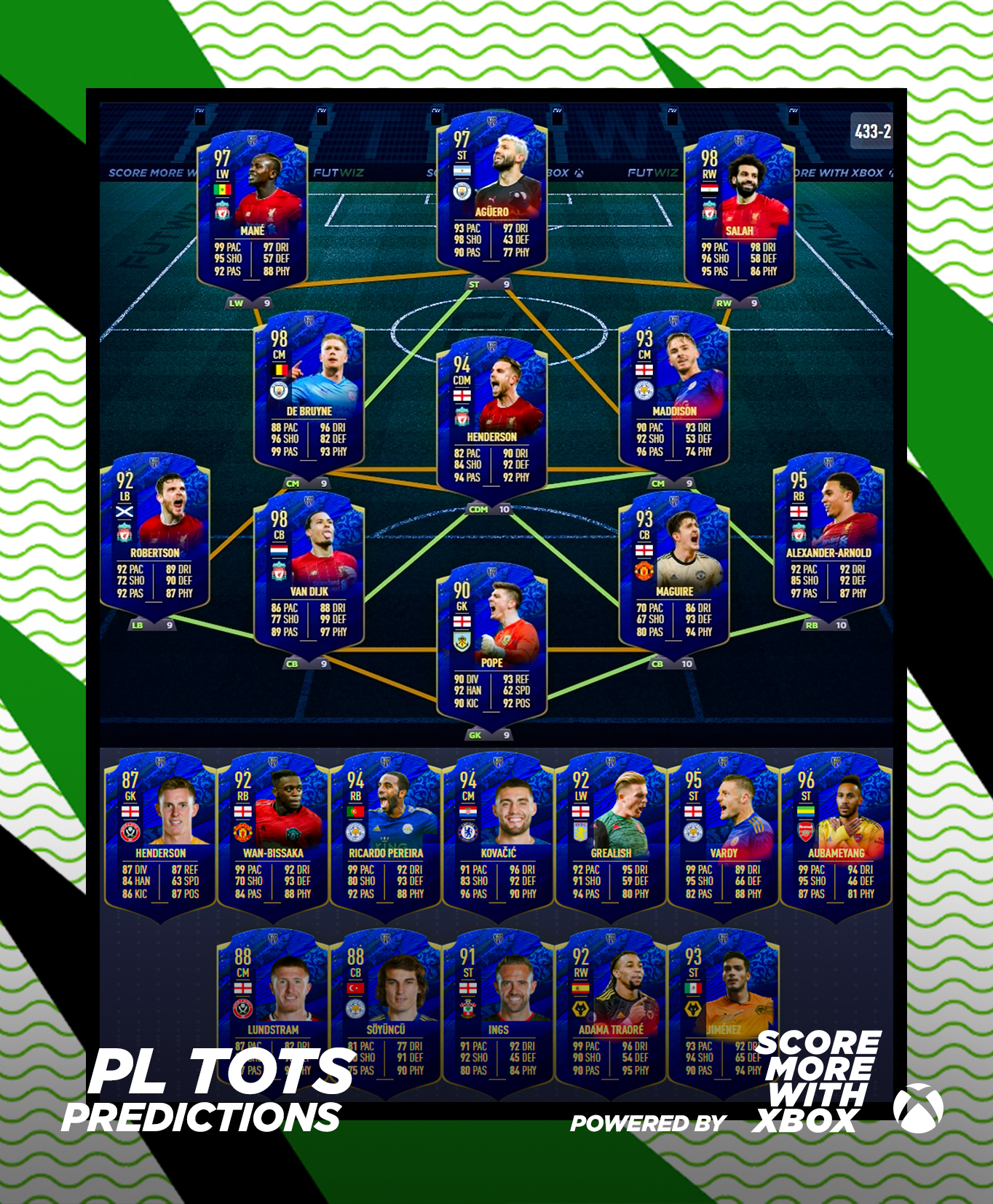 One of the hardest positions to choose this season. There’re 5 goalkeepers that deserve a spot, but only 2 spots in a team. I chose Dean Henderson and Nick Pope. Both are playing very well for their teams and both have impressive statistics. Henderson having the most clean sheets in the league must earn him the spot.

2nd spot is really debatable Pope, Alisson, Leno, Schmeichel – all of them deserve to be in TOTS. I didn’t include Alisson because feels like he missed too many games, Schmeichel – I think there are too many Leicester players so Kasper may be one of the ones to miss out. Pope and Leno – debatable. I could be wrong with Pope, but it’s fine as it's a tough one to call.

Left Back: Feels like there is only one clear choice in the Premier League this season: Andrew Robertson. Not many other options, Robertson by far the best left back in the league and also made the FUT20 Team of the Year. Other options than him: Lucas Digne \ Ben Chilwell. Digne would be my choice for the 2nd spot, but Everton playing so inconsistent this year and Digne himself too. Chilwell would be also a decent choice, but in my opinion he had kinda mediocre 2nd half of the season.

Right Backs: This one has to be one of the most stacked spots in the team, there were so many good right-backs this year so I decided to include 3 players: Trent Alexander-Arnold, Roberto Pereira and Aaron Wan-Bissaka. 3 Different players: Trent the more attacking right-back, Wan-Bissaka more defensive while Pereira in somewhere in the middle. I think all 3 will get into TOTS, there’s also a strong 4th option: Matt Doherty, but a 4th right-back would be too much in my opinion, even 3 might be considered a bit too much.

Central Backs: 3 main options: Virgil Van Dijk, Harry Maguire and Caglar Soyuncu. Virgil Van Dijk and Soyuncu are nailed on a TOTS, as they both had very good seasons, while Harry Maguire had a bit of a rough start of the season at United but his second half of the season has been a lot stronger, not conceding a lot of goals in 2nd part of the season. Overall, there weren’t many stand out central backs this season. Other options would be: Conor Coady and Chris Basham, but it’s a bit hard to include them as spots are pretty limited in this team.

Central Midfielders: Another pretty stacked position in the team, a lot of options, but let’s start with the main man:

Kevin De Bruyne. In my eyes he's the player of the season in the Premier league. An absolutely insane season for the Belgium international, no one would argue about his spot in TOTS.

Another player that is a must in TOTS: Jordan Henderson, many claim that he should win POTY, but it’s not up for me to decide. His importance to this Liverpool squad is undebatable, he was injured for a month and Liverpool really struggled that month. Jordan had an amazing season and his TOTS should be a good one.

3rd option is James Maddison, he had amazing start to the season but then dropped off a bit but still, compared to other midfielders – he deserves to be in the TOTS. If not him then there is another option from Leicester: Wilfrid Ndidi, an amazing season for Nigerian International, but again it’s another Leicester player and I don’t want to make full Liverpool + Leicester TOTS as they usually end up being fairly balanced team-wise!

4th option: Mateo Kovacic. Best player for Chelsea this season and probably the only one in my predictions. He hasn’t had special cards this year (apart from Season rewards) so there is a shout for him to be included in the Most Consistent TOTS too.

5th option: John Lundstram. 2nd player from Sheffield United, in my eyes – probably their best player after Henderson. Lundstram really deserves TOTS in my eyes, even tho he’ll be a bit low rated.

Feels like this year is a bit strange, not many wingers played well because for last few years we have been spoilt for choice with TOTS PL wingers.... this year is: Well… let’s try to find a second winger.

Jack Grealish is my 2nd choice, even if Aston Villa do end up being relegated – Grealish deserves some recognition. Maybe not TOTS, but some sort of SBC. He’s trying his best to carry Aston Villa and maybe he’ll succeed in that (depends on how season will be completed).

Salah is another locked choice. One of the most consistent players in Premier League in recent seasons. 3rd year in a row he’ll get TOTS.

2nd player is kinda debatable, but Adama Traore should get it. Not only because he improved his game, but also because he’s a pretty hyped player IRL and praised by a lot of people. Not many choices, apart from him, again... same as left-wingers.

Strikers.
Well, here is the most stacked position in this TOTS. A lot of options... maybe even too many this season? Feels like only Strikers were consistently scoring goals.

Let’s start with Sergio Aguero: Another really impressive season for Aguero, broke a few records, scored a lot of goals and was very good for City.

Raul Jimenez – 2nd player from Wolves in this team, feels like he’s very underrated by many, but in my eyes he really deserves TOTS this year, as he narrowly missed out last year.

Jamie Vardy – clearly he’ll get one. Most goals scored in the league (for now). Even tho he had a rough patch in winter and hasn’t scored for a few games, he still showed class in March, and of course he had a long goal-scoring streak at the start of the season.

Pierre-Emerick Aubameyang: Only 1 Arsenal player that deserves TOTS in my eyes. Overall, he was carrying them this season, even when he currently plays on the wing – he still scores goals. Amazing player.

Danny Ings – Man, what a season for him, it’ll be really unfortunate if he’ll miss on TOTS because he deserves it so much. Southampton should survive this season and Ings is the main reason for that. Lots of goals, loads of highlights.

Other 2 choices that I didn’t include, but they can get in: Marcus Rashford and Tammy Abraham.

Why I didn’t include them: Abraham had a good start of the season, but then he started scoring less and less and then unfortunately got injured. I don’t think he should get one, but there is a real possibility that he could be included if they do TOTS Moments SBCs.

Rashford is kinda the same. He was really good for United, but then got injured. Doubt that he deserves a spot over players that I included, but if he will get it – it should be instead of Jimenez IMO.


Again, this season is very hard. It was hard to choose 23 players for TOTS. Of course there will be more than 23 – in SBCs, Objectives, etc, but these are 23 players that in my eyes deserve to be in packs.

I tried to be as unbiased as possible and tried to include players from different teams to make fans happier.

Hopefully this year TOTS will be good!