Last week we got good result in 3\4 right games. Only 1 game that I missed was Swiss vs Spain and I even included it in first place, but then decided to exclude it. Have no idea why, but thought it was right move.

This week we’re back to club football and there’re a lot of derbies. It was hard to choose only 6 games, but here we are.

Solid 3 out of 4 would be great for this week, especially with a number of games. 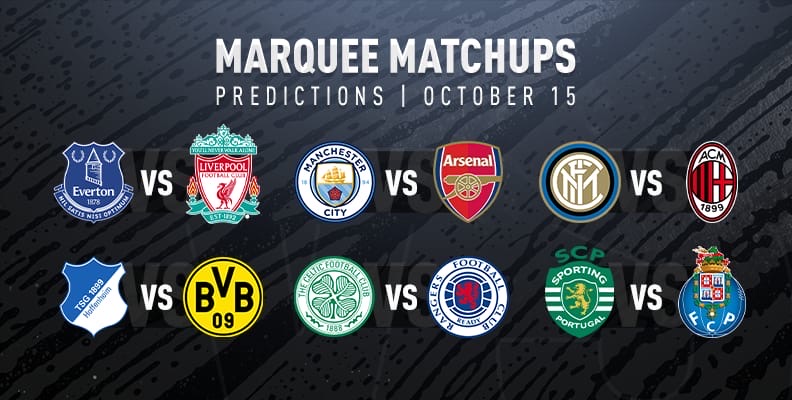 Everton vs Liverpool \ Manchester City vs Arsenal
2 great games in England. 1st is Merseyside derby, so it’s a must to include it in predictions. Everton sitting at 1st, while Liverpool already dropped 1 game, so it’s the battle for 6 points.

2nd game is Arteta-derby. City vs Arsenal always provided some great results and good game to watch, it got interesting lately, as Arsenal became pretty competitive, and City struggled at the start of the season. We’ll see how the game unfolds, so yeah, I think both games can\should be included.

What to buy : Any rare players from those teams, I suggest some cheap English players, especially those who are going for discard prices. Requirements aren’t that hard at the start of the FIFA, so yeah I don’t expect something sensational to happen.


Inter vs Milan
Big derby of Milan. Game can be postponed due to covid in both teams, but we’ll see. Overall game should be included, both teams on a rise, Milan haven’t lost in ages and Inter wants that Scudetto title. Overall Milan derbies are exciting to watch and if the game will happen – I expect some Lukaku masterclass.

What to buy : Any players from those teams. Of course some unique nations might be a priority, but don’t afraid to buy basic Italians too. Rares can be more expensive but might rise higher.

It might not be a derby, or even a rivalry, but this game always delivers. Last time Kramaric scored 4 goals vs BVB and Borussia wants a revenge for sure. Games between 2 teams are usually really tight or highscoring, or both, or even include some awesome comebacks. I can’t wait.

Celtic vs Rangers
Old Firm derby is always hyped, right? Especially when 2 teams are competitive and the games are always bangers. It’s time for some SPL love in FUT and what’s better way to show that than some inclusion into Marquee Matchups, right? Teams separated by 1 point and Rangers sit on 1st atm.


Sporting vs Porto
Always a good game between Sporting and Porto. Maybe it’s not as hyped as Sporting vs Benfica or Porto vs Benfica, but still a solid game and can be included into MMs. It’s the least likely game in MMs, in my opinion, but still has a chance.

What to invest in: Any gold players from those teams. Portugal or not – probably doesn’t matter. Maybe not even teams, just a whole league. As I’ve said – least likely game to be included.
There are also few other games to highlight, but I don’t think they’ll be included.


So yeah, that’s all for this week, hopefully it’ll be a good one, and I’ll get most of the games right.