Last week we got 3\4 and I was pretty happy. Well, actually 3,5\4 as I included Bundesliga game, but mistaken it a bit, as I didn’t think that midweek games will be included.

I’ll do the same mistake and won’t include midweek games yet again and then complain next week too. Watch this.

This week is going not to be as exciting as previous one, but there are few stand out games. 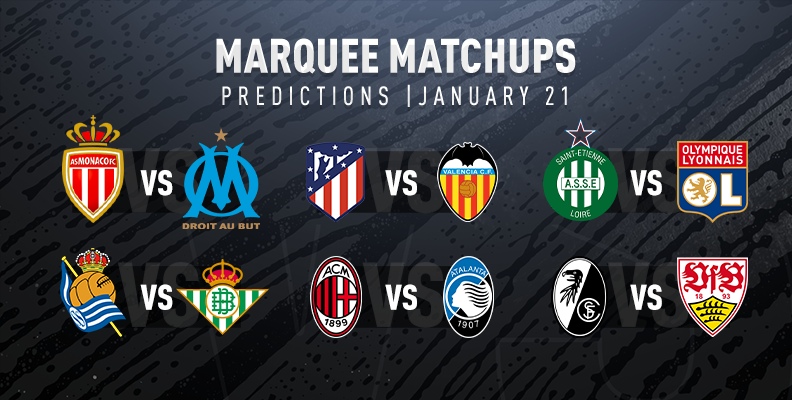 I decided to go with this option from La Liga as other leaders play vs teams from bottom part of the table. Sociedad struggled a bit last few months after very bright start, while Betis somewhere in the middle of the table. I think this game should be exciting, as both teams are coached by good managers. Teams are separated by 7 points only and I think both teams are aiming at 5-6th places to qualify for Europa League for next season.

Atletico Madrid vs Valencia is more likely to be included, but Valencia are sitting really low in table. I expect a very close game, as Valencia shown that they can battle with good teams (won vs Real, drew vs Barca). IMO this game should be included in MMs. Atletico are aiming to win La Liga, so every game is important for them.
Most likely requirements:

What to invest in: A lot of choices from those teams, so I wouldn’t invest too much in them. If anything – I’d buy few players from Atletico and Valencia and be safe.

Milan vs Atalanta
Should be a very exciting game between 2 on form teams, Atalanta back in action and playing well, conceding not a lot of goals, and Milan are still first. Should be a very close game and both teams are in-need of wins, as Milan aiming at winning Serie A and Atalanta would like to get into UCL again despite their struggles mid-season.

What to invest in: Just few players from different nations from Serie A teams. I think they’d require multiple nations squad, because there are a lot of options from the teams and players won’t rise anyway.

Monaco vs Marseille \ ASSE vs Lyon
2 big games in Ligue 1 for different reasons. Monaco vs Marseille is a battle for UCL spots and battle for Headliner upgrade of Ben Yedder. Monaco started performing very well this season, Kevin Volland and Ben Yedder score loads of goals and overall team working well together. I’m surprised because I didn’t expect too much from Niko Kovac, but he exceeded my expectations. Marseille performing worse this year than previous one for obvious reasons: not a big squad, too many games (with UCL too). But they are still battling for UCL spots, so game should be really close.

ASSE vs Lyon is a big big derby in France and no matter on which places teams sit in the table – game should be exciting and interesting. Also Lyon are battling for 1st spot, so this game is uber important for them.

What to invest in: Any players from those teams or Ligue 1 in general and you’ll be safe.

Big derby in Germany between 2 not really hyped teams, but this game can be included. Teams sit near eachother in table, separated by only 1 point. Freiburg been playing really well before game vs Bayern and even tho they lost it, they played well enough. Stuttgart is probably the biggest surprise of the league as many people expected them to be relegated.

What to invest in: Any players from those teams or Bundesliga. I doubt that they’d require any specific teams, so yeah, you’ll be safe.

I didn’t include any game from PL as no games to highlight for me, but if they’ll include one game – it probably be Southampton vs Arsenal.
There are also few other games to highlight, but I don’t think they’ll be included.